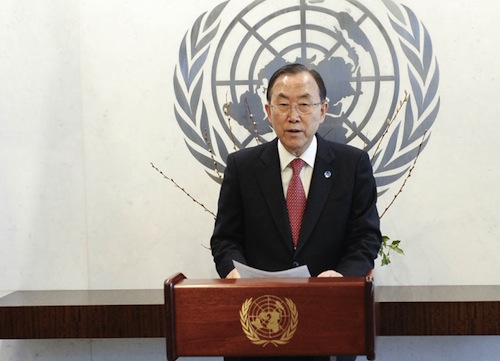 Secretary-General Ban Ki-moon and the United Nations Security Council have strongly condemned a recent terrorist attack on the Iman mosque in Damascus, Syria, that left over 40 people dead, including a senior Muslim cleric, and dozens injured.

“The Secretary-General believes that this latest atrocity, along with others prior to it, should be promptly and fully investigated and perpetrators brought to justice,” his spokesperson said in a statement.

“Deliberate targeting of civilians and civilian objects, including places of worship, constitutes a war crime. These heinous acts must stop immediately,” the statement added.

Council members expressed their deep sympathy and sincere condolences to the families of the victims of this “heinous act” and to the people of Syria and wished a swift recovery to the injured, Ambassador Vitaly Churkin of Russia, which holds the rotating presidency of the 15-member body for this month, said in a statement read out to the press.

Thursday’s bombing is the latest deadly incident in two-year-old conflict that has already claimed over 70,000 lives and displaced more than three million people since the uprising against President al-Assad began in March 2011. Some 1.1 million people have also been forced to flee Syria and take refuge in neighbouring countries.

The conflict has also spawned a massive humanitarian crisis and resulted in widespread human rights violations.

Today in Geneva, the UN Human Rights Council decided to extend the mandate of the independent panel tasked with investigating alleged violations of international human rights law in Syria since March 2011.

Meanwhile, the UN High Commissioner for Human Rights, Navi Pillay, has welcomed Secretary-General Ban Ki-moon’s decision to conduct a UN investigation into the possible use of chemical weapons in Syria, and said her office stands ready to join the investigation if requested to do so.

“If chemical weapons do indeed turn out to have been used, this can only be described as an abominable and depraved act,” Rupert Colville, spokesperson for the High Commissioner, told reporters in Geneva.

“We hope these reports turn out to be incorrect, because if they are true this terrible conflict will have plunged to new depths,” he added.

The use of chemical weapons would most likely be either a crime against humanity or a war crime, said Colville. “The High Commissioner echoes the Secretary-General’s call that – if such a crime has been committed – those responsible must be held accountable.”

Ban announced that the UN will launch an independent investigation into the allegations, after receiving a formal request from the Syrian Government. The probe will start as soon as “practically possible” and the modalities are being worked on in close consultation with the relevant bodies, including the Organization for the Prohibition of Chemical Weapons (OPCW) and the World Health Organization (WHO).

“The investigation mission is to look into the specific incident brought to my attention by the Syrian Government,” Mr. Ban told journalists on Thursday. “I am, of course, aware that there are other allegations of similar cases involving the reported use of chemical weapons,” he added.

Secretary-General’s spokesperson said that Ban had received a joint letter from France and the United Kingdom, in which they requested an investigation into several incidents of alleged use of chemical weapons in Syria.

The Secretary-General has provided a reply letter to both missions, and requested them to provide additional information pertaining to the alleged incidents. He also replied to the letter from the Syrian Government to inform it that he had decided to establish a UN investigation on the possible use of chemical weapons in Syria.

He requested the Government to provide additional information pertaining to the alleged incident, and added that the mission would require full cooperation from all relevant Syrian authorities, including on the issue of unfettered access.