UN temporarily relocates some staff out of Syria owing to insecurity 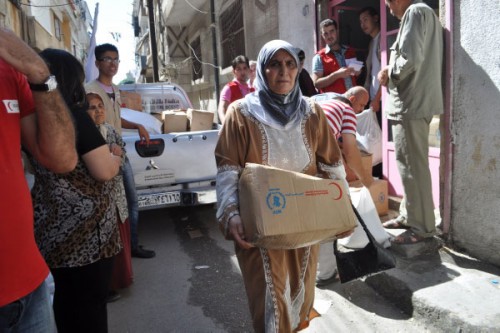 The United Nations is temporarily relocating some of its international staff in Syria out of the country due to security conditions, a spokesperson for the world body said today.

Martin Nesirky told reporters in New York that yesterday and today, a number of mortar shells fell in close proximity to, and on the grounds of, the hotel in Damascus housing UN staff. The mortar fire caused some damage to the building and some cars in the parking lot, including one UN vehicle.

“The United Nations Security Management Team has assessed the situation and decided to temporarily reduce the presence of international staff in Damascus due to security conditions. We are also exploring safer premises,” he stated.

“The United Nations attaches great importance to the safety of all its staff – national and international. With this in mind, we are temporarily relocating some of the UN international staff in Syria out of the country.”

As part of that effort, Mr. Nesirky said that most of the Damascus-based staff of the Office of the Joint Representative for Syria, Lakhdar Brahimi, are being temporarily relocated to Beirut, Lebanon, and to the Joint Special Representative’s main office in Cairo. All of the Office’s national staff have been asked to work from home, until further notice.

“These measures are being undertaken solely for security reasons,” said the spokesperson. “The United Nations remains active and committed to helping the Syrian sides in their search for a political solution.”

There are approximately 100 international and 800 national staff in Damascus working with the offices of the Joint Special Representative, the Resident Coordinator, the Office for the Coordination of Humanitarian Affairs (OCHA), and various UN agencies and programmes.

Mr. Nesirky added that UN agencies and their partners also remain committed to providing assistance to millions of people in need across Syria. Over 70,000 people have been killed and more than three million displaced since the uprising against President al-Assad began in March 2011. Some 1.1 million people have also been forced to flee Syria and take refuge in neighbouring countries.

“The UN will maintain inside Syria the number of staff and capacity required to continue running its critical humanitarian programs and deliver assistance to civilians in need. This is a priority for the UN.”