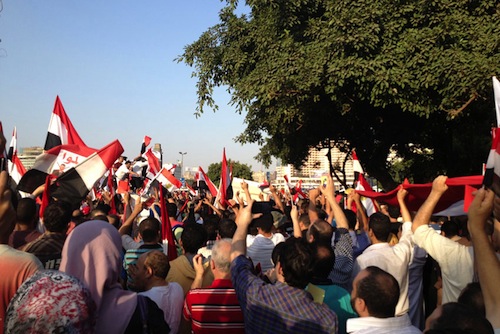 Secretary-General Ban Ki-moon and the United Nations human rights chief have voiced growing concern about developments in Egypt and called on authorities to ensure respect for the rule of law and international human rights standards.

“The Secretary-General once again urges all sides to act with maximum restraint. He supports the rights of all Egyptians to hold peaceful protests. He calls on the interim authorities to ensure law and order along with guaranteeing the safety and security of all Egyptians,” Ban’s spokesperson said in a statement.

“The Secretary-General renews his calls for a meaningful national dialogue and an inclusive reconciliation process. The aim must be to chart a peaceful path towards a full return of civilian control, constitutional order, and democratic governance,” the statement added.

Protests on Friday and Saturday have left scores of people dead and hundreds others injured. In a new statement, Ban stressed that Egypt’s security forces must act with full respect for human rights, including guaranteeing the rights to free speech and assembly. The Secretary-General appeals to all the people of Egypt to address their differences through dialogue and again renews his calls to all parties to engage in an inclusive and meaningful reconciliation process.

Ban also urged demonstrators to exercise restraint and preserve the peaceful nature of their protests.

“The Secretary-General appeals to all the people of Egypt to address their differences through dialogue and again renews his calls to all parties to engage in an inclusive and meaningful reconciliation process,” according to the statement.

The crisis in the country escalated earlier this month, resulting in the Egyptian military deposing President Mohamed Morsy amid widespread protests in which dozens of people were killed and wounded. The Constitution was then suspended and an interim government set up.

Ban urged the interim authorities to end arbitrary arrests and other reported forms of harassment. Morsy and Muslim Brotherhood leaders currently in detention should be released or have their cases reviewed transparently without delay, he added.

Meanwhile, speaking at a news conference in Geneva, the spokesperson for UN High Commissioner for Human Rights Navi Pillay stressed that it is extremely important that security forces in Egypt do not resort to excessive use of force.

“People have a right to make peaceful protests,” said Rupert Colville. “All measures taken by the authorities must fully respect the law and international human rights standards. We will be closely following how the situation develops.”