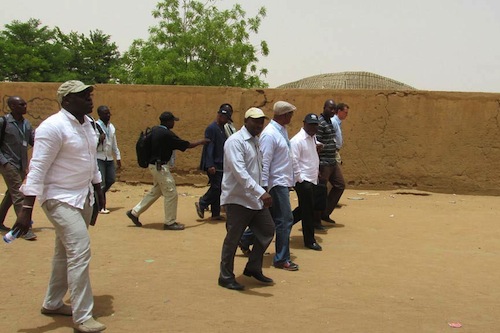 The United Nations relief wing warned of severe humanitarian needs in Gao in eastern Mali, including the need to rehabilitate the water supply and increase food assistance.

A recent inter-agency mission to Gao, led by UN Humanitarian Coordinator for Mali Aurélien Agbénonci, found that rehabilitating the water supply is imperative to urgently assist the population of some 70,000 people in the city, as is increasing food assistance.

Jens Laerke, spokesperson for the UN Office for the Coordination for Humanitarian Affairs (OCHA), told reporters in Geneva that the amount of drinking water available to people has fallen 60 per cent over the past weeks.

There was food distribution ongoing to about a third of the population in Gao, but that covered only part of the needs, according to the mission participants.

“Water is a main issue: some neighbourhoods in Gao did not have water at all due to dysfunctional pumps and lack of electricity,” said Laerke. “Outside of the city, the situation is even worse because the Niger River was the only source of water and there were concerns about cholera outbreaks.”

He said that 22 cases of cholera had been registered in May, and two people had died. No new cases had been reported in the past five days, however, but the risk of cholera remained high.

OCHA has deployed two staff to Gao and is in the process of opening an office. In total, there are more than 100 humanitarian organizations in Mali. The $410 million humanitarian appeal for Mali is 29 per cent funded as of today.

Providing an update on schools in the north, Marixie Mercado of the UN Children’s Fund (UNICEF) told reporters that 42 per cent of schools in Gao, Kidal and Timbuktu are now functional, with 100,000 students being taught by 23,000 teachers. This is mostly in the urban areas since there is still a high level of insecurity in the rural areas, and across the region the lack of infrastructure and logistical resources is still a major constraint.

Mercado added that there is still a major chronic malnutrition crisis across the country, particularly in the south where 90 per cent of the population live.

Meanwhile, the UN High Commission for Refugees (UNHCR) said today that with the first round of presidential elections in Mali due on 28 July, consultations were under way between the interim Malian Government and refugee-hosting countries on including refugee populations in the voting. These consultations were expected to be followed by bilateral agreements that would form the basis of the electoral process in each of the main refugee-hosting countries.

“While details of the out-of-country electoral process are still being worked out, UNHCR is ready to facilitate the exercise by refugees of their right to vote,” said UNHCR spokesperson Adrian Edwards.

According to the agency, some 174,000 Malians have found refuge in neighbouring countries since the conflict began in January 2012. Burkina Faso hosts 50,000 refugees, Mauritania 74,000 and Niger 50,000. Smaller groups of Malian refugees are also in Algeria.

“UNHCR supports the voluntary participation of refugees in the elections, although our role will be limited to a strictly humanitarian and non-political one,” Mr. Edwards stated.

In conjunction with refugee-hosting countries and refugees, UNHCR will facilitate space for dialogue on the electoral process, and for registration of voters. It is expected that registration of voters in camps and outside camps will be the responsibility of the Malian electoral commission, who would work with host governments to establish voting lists.

UNHCR has previously facilitated out-of-country voting by refugees in South Sudan in 2011, in Iraq in 2010 and in Afghanistan in 2004.