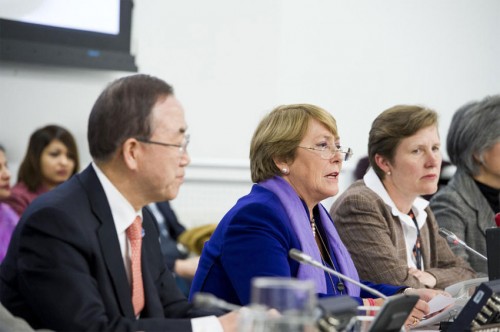 Top United Nations officials today welcomed an agreement by more than 130 Member States on the prevention and elimination of all forms of violence against women and girls, and urged governments to translate the outcome of the ‘historic’ gathering into concrete actions to protect and promote women’s human rights and fundamental freedoms.

“Violence against women is a heinous human rights violation, global menace, a public health threat and a moral outrage,” Secretary-General Ban Ki-moon said in a statement attributable to his spokesperson.

“The Secretary-General hopes that all the partners who came together at this historic session and others around the world will now translate this agreement into concrete action to prevent and end violence against women and girls,” the spokesperson added.

Violence against women is a heinous human rights violation, global menace, a public health threat and a moral outrage.

Thousands of representatives of governments, inter-governmental organizations, civil society, the private sector and UN partners collaborated on the outcome document of the two-week 57th Session of the Commission on the Status of Women in New York.

The 17-page ‘Agreed Conclusions’ of the Commission “condemns in the strongest terms the pervasive violence against women and girls, and calls for increased attention and accelerated action for prevention and response,” said in a statement the UN Entity for Gender Equality and the Empowerment of Women (UN Women), which supports the Commission.

UN Women said it welcomed the important focus on prevention in the document, particularly through education and awareness-raising, as well as an emphasis on addressing gender inequalities in the political, economic and social spheres.

Among the priorities in the document is the establishment of multi-sectoral services for survivors of violence, including for health, psychological support and counselling, as well as the need to protect the right to sexual and reproductive health.

Ending impunity is also highlighted in the text, according to UN Women, in the context of punishing perpetrators, along with improving collection of evidence and responding to victims.

As many as seven out of every 10 women will experience violence in their lifetimes, according to UN figures. While more than 125 countries have specific laws that penalize domestic violence, some 603 million women live in countries where it is not considered a crime.

“By adopting this document, governments have made clear that discrimination and violence against women and girls has no place in the 21st century,” the UN entity said. “There is no turning back.”

UN Women’s Executive Director, Michelle Bachelet said she was “particularly heartened” that an agreement was reached now given that in 2003, when the Commission took up the topic of violence against women, participants could not agree on a plan.

“We will keep moving forward to the day when women and girls can live free of fear, violence and discrimination. The 21st century is the century of inclusion and women’s full and equal rights and participation,” added Ms. Bachelet.