UN welcomes formation of new government in Libya amid protests 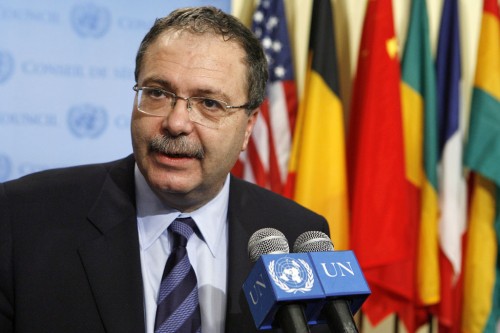 The top United Nations official in Libya yesterday welcomed the formation of the country’s new Government, and extended his congratulations to Prime Minister Ali Zeidan and members of his Cabinet.

“He wishes the new Government success in addressing the many challenges new Libya is facing, including the building of security institutions, promoting national reconciliation as well as upholding the rule of law, securing human rights and implementing transitional justice,” said a news release issued by the UN Support Mission in Libya (UNSMIL), which  Mitri heads.

“In meeting these challenges, the support of the Libyan people to its democratically elected State institutions is essential,” added the release, which described the General National Congress as the country’s “legitimately elected body chosen to represent the will of the Libyan people for moving forward in the process of their democratic transition.”

According to media reports, the General National Congress approved Prime Minister Zeidan’s proposed Government on Wednesday after rejecting his predecessor’s proposed incarnation. The body had reportedly met on Tuesday to vote but postponed its session after protesters, opposed to some of the ministerial nominations, stormed the building.

Mitri also spoke of an “urgent need” for dialogue in Libya, citing recent fighting in and around the western Libyan city of Bani Walid as evidence of this.

Libyan army forces reportedly seized control of the city last month after saying it harboured a number of supporters of the former dictator Muammar Kaddafi, who was overthrown in 2011 after decades of autocratic rule.

Mitri called on Libyans to “work together towards national reconciliation and strengthen State civilian and security institutions to affirm the authority of the Libyan State over its national territory and ensure protection of all citizens and stability in the country,” stated the UNSMIL news release, issued some hours before fresh media reports of additional unrest in Libya today.

The UN official also emphasized that the world body would support the new Government and the Libyan people in accordance with the Security Council resolution, adopted unanimously on 12 March this year, which renewed UNSMIL’s mandate to help Libya in its transition towards a modern democratic state.