UN welcomes resumption of talks between Sudan and South Sudan 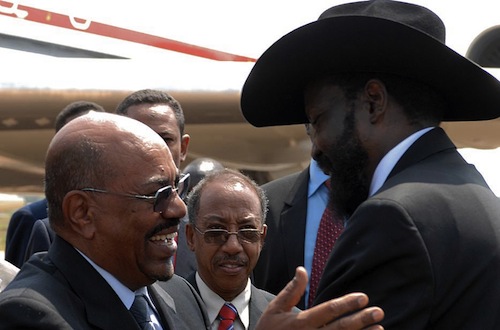 Noting a reduction in violence in the shared border area between Sudan and South Sudan, the United Nations Security Council has welcomed the resumption of negotiations between the two countries – while, at the same time, voicing concern over the implementation of measures aimed at helping reduce tensions.

“The members of the Security Council welcomed the resumption of negotiations between Sudan and South Sudan under the auspices of the African Union High-Level Implementation Panel (AUHIP),” the Council members said in a press statement on Monday night.

“They noted that there has been a reduction in violence in the border region and commended that some progress was made by both parties in implementing the requirements of resolution 2046,” the Council members added, calling for parties to immediately implement their obligations under its resolution and a roadmap put forward by the African Union (AU).

South Sudan became independent from Sudan in July last year, six years after the signing of a peace agreement that ended decades of warfare between the north and south. However, the peace between the two countries has been threatened by clashes along their common border and outstanding post-independence issues, including the ownership of the Abyei area which straddles the two countries.

Acting under the binding Chapter VII of the UN Charter, the Council adopted resolution 2046 in May. It called on the two countries to immediately end hostilities and resume negotiations to resolve all outstanding issues, including Abyei, and voiced the 15-member body’s intention to take “appropriate measures” if the parties did not comply.

The resolution also called for the parties to activate border security mechanisms, including the Joint Border Verification and Monitoring Mechanism, without prejudice to ongoing negotiations on disputed areas.

In its press statement, the Council members expressed “strong concern” about delays and stressed that important elements of resolution 2046 remain unresolved by both parties. They also stressed the requirement that Sudan and South Sudan resolve all outstanding issues within the time-frames laid out by the AU Roadmap, as well as the resolution.

“The members of the Security Council underscored the urgency of immediately establishing the necessary border security mechanisms and reiterated that the Safe Demilitarized Border Zone (SDBZ) shall be established, as stipulated in [resolution] 2046, in accordance with the administrative and security map presented to the parties by the AUHIP in November 2011, it being understood that this map in no way prejudices ongoing negotiations on the disputed areas and demarcation of the border,” the Council members said.

The AU Roadmap, put forward by that body’s Peace and Security Council in late April, provided a time-frame and steps – for implementation by both Sudan and South Sudan – aimed at helping ease tensions, facilitate the resumption of negotiations on post-secession relations and normalizing relations between the two countries.

In relation to Abyei, the Council members welcomed the full withdrawal of the Sudanese Armed Forces and Sudanese Police Service personnel, and called on the Government of Sudan to complete the withdrawal of its forces from the contested area by redeploying all oil police in accordance with resolution 2046 and the 20 June 2011 Agreement on Temporary Arrangements for Security in the Abyei Area.

In June 2011, following an outbreak of violence after Sudanese troops took control of the area weeks before South Sudan became independent, the Security Council authorized the establishment of the UN Interim Security Force for Abyei (UNISFA) to oversee demilitarization of the area and maintain security following an outbreak of violence. In May this year, it extended UNIFSA’s mandate for six months.

In its press statement, the Council also reiterated its “grave concern” about the situation in Southern Kordofan and Blue Nile states of Sudan, especially in relation to the “rapidly worsening humanitarian situation there, and in this regard expressed concern that the parties have not implemented the relevant provisions of resolution 2046.

The states of Southern Kordofan and Blue Nile, which lie on the border between Sudan and South Sudan, have been beset by fighting between Sudanese forces and the Sudan People’s Liberation Movement-North (SPLM-North) since last year. The SPLM-N was previously part of the rebel movement that fought for the independence of South Sudan.

The fighting has led to the displacement of thousands of people, and led to concerns over the humanitarian situation there.