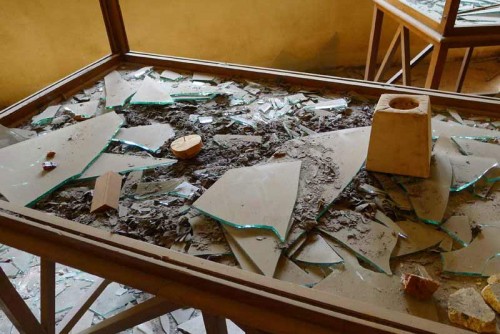 Experts from the United Nations cultural agency have confirmed that nearly all the collections of the Malawi National Museum in Upper Egypt have been looted following last month’s unrest.

“While the buildings were not badly damaged, 600 of the Museum’s collection of 1080 artefacts were missing,” the UN Educational, Scientific and Cultural Organization (UNESCO) said in a statement following a visit of its experts to Minya.

The mission, organized with the Egyptian Ministry of Antiquities and local authorities, follows the 18 August statement of UNESCO Director-General Irina Bokova on the museum’s looting.

The destruction constitutes “irreversible damage to the history and identity of the Egyptian people,” Ms. Bokova said.

She had pledged to lend the Organization’s technical support and mobilize partner organizations of the 1970 Convention against Illicit Traffic of Cultural Heritage, including the International Criminal Police Organization (INTERPOL) and the World Customs Organization.

During the visit, from 11 to 16 September, the International Expert and UNESCO Consultant, Architect Pierre-André Lablaude, and a UNESCO expert also visited other cultural sites damaged during recent unrest, among them, the Evangelical Church in Minya, Amir Tadros Monastery in Fayoum and the Franciscan Sisters School in Beni Suef.

Some other significant churches could not be visited for security reasons.

Several other sites and museums were visited by the experts at the request of the Egyptian Ministry of Antiquities and the Ministry of Culture, notably the belle époque Casdagli Villa in Cairo, which was found to be sound despite superficial damage in February 2013.

Egypt has been undergoing a democratic transition following the toppling of President Hosni Mubarak two years ago in the wake of mass protests. Renewed protests starting in July – in which dozens of people were killed and wounded – led to the Egyptian military deposing Mr. Morsy. The Constitution was then suspended and an interim government set up.