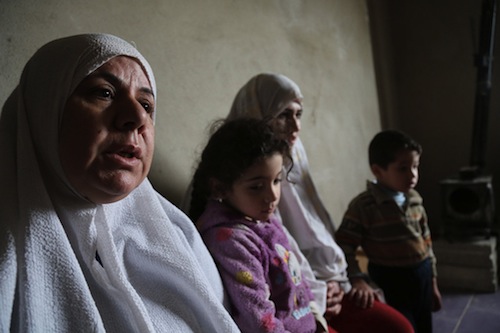 The UN refugee agency reported on Friday that an increasing number of Syrian refugees have been opting to return home from Jordan since the start of April despite continuing conflict.

“During this period, an average of 300 people have been crossing each day, returning to villages close to the border in the governorate of Dara’a,” UNHCR’s chief spokesperson, Melissa Fleming, told journalists in Geneva. “A sizeable part of this governorate remains a battleground and UNHCR fears for the safety of the returnees, the vast majority of whom are families,” she added.

The reasons for returning are varied, including improved security in a number of border villages, safeguarding their property, reuniting with family members in Syria, or travelling to collect and bring back vulnerable family members to Jordan.

But new arrivals to Jordan continue to outpace this limited number of returns, with an average of 2,000 people crossing each day into Jordan. Every day there are wounded new arrivals. The total number of Syrian refugees who have spontaneously returned is less than 1 per cent of the total arrivals.

Although the number returning was relatively small, Fleming said UNHCR was “very concerned that refugees are returning to areas blighted by shortages of food, lack of fuel and electricity and limited services. The security situation is volatile, with reports of artillery shells and mortars being fired into villages refugees are trying to reclaim their homes and lives in.”

Returnees are joining hundreds of thousands of civilians in southern Syria who have long been struggling to survive. Basic staples like bread are often in short supply, while health care and education are often unavailable. “If the conditions do not improve, it will be impossible for many to remain there,” Fleming stressed.

The government estimates that the number of Syrian refugees in Jordan is expected to exceed 500,000 this month. If conditions do not improve inside Syria, the unrelenting flow of refugees fleeing to Jordan can be expected to continue.

“UNHCR does not promote or facilitate these returns, but we are counselling refugees who wish to return of the conditions they will face. We also undertake regular missions to the border,” Fleming said in Geneva. UNHCR is working with the Jordanian authorities to ensure that all refugees have access to their documentation should they make the decision to return to Syria.

Meanwhile, UNHCR has monitored 3,900 returns from Iraq in the past year, mainly from Al Qaim camp in Anbar Governorate to Abu Kamal in Syria. The situation in Abu Kamal is volatile, with bombings and conflict in the province. The main reasons given by refugees for returning are lack of freedom of movement in Al Qaim, limited livelihood opportunities and encouraging reports about security.

“We are closely monitoring the situation and provide individual counselling to potential returnees to ensure they make an informed decision and understand the possible consequences of their return,” Fleming said.

She added that UNHCR provides regular technical support in the voluntary repatriations from Turkey through observation of the interviews conducted by designated Turkish authorities to safeguard the voluntary nature of return.

According to the Prime Minister’s Disaster and Emergency Management Directorate, more than 97,000 Syrians have returned since March 2011. Of this number, UNHCR has observed interviews with 13,000 cases, or more than 24,000 people. Roughly half of those returning said they were going back to Syria temporarily to check on their homes or to attend funerals. Some said they were returning due to reports of an improvement in the security situation.