Posted on: October 3rd, 2012 by AlYunaniya Staff No Comments

UNHCR helps more than 25,000 refugees return to their homes in DR Congo 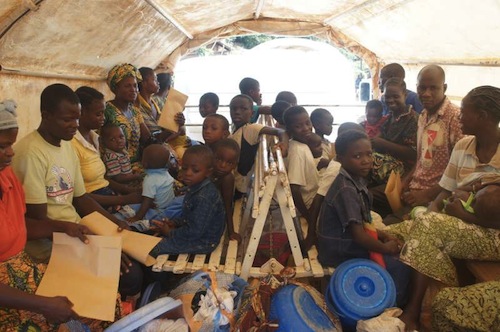 More than 25,000 Congolese refugees have returned to their homes in the northern Democratic Republic of the Congo (DRC) under a voluntary repatriation programme that was launched in May by the United Nations refugee agency.

“The 25,000 mark was passed last Friday – the current total of those helped back by UNHCR is 25,696,” said the spokesperson for the Office of the High Commissioner for Refugees (UNHCR), Adrian Edwards, at a press briefing in Geneva.

“UNHCR hopes to repatriate a further 24,000 more refugees, mostly from Equateur province, across the Oubangui River to the DRC by the end of this year, plus a further 32,000 next year,” he added.

There are currently more than 100,000 Congolese in the neighbouring Republic of Congo, who have been living in isolated areas along the river since fleeing ethnic clashes in the DRC’s Equateur province in 2009.

Since July, UNHCR has picked up the pace of returns, providing each family with an aid package on arrival and initiating reintegration activities to ensure a sustainable return especially in the Libenge and Kungu territories, the spokesperson said.

“So far, and with a limited budget, UNHCR and its partners have distributed 700 shelter kits for spontaneous returnees and have also built 350 shelters and 12 wells for the most vulnerable households as well as primary schools,” Mr. Edwards noted, adding that the refugee agency has also started awareness campaigns to ensure peaceful co-existence between the various communities.

Returnees have also told UNHCR staff that they believe the security situation has improved, while parents say they want to go back to enroll their young children in primary schools.

At the height of the crisis, about 143,000 Congolese fled their villages for safety in Republic of Congo and the Central African Republic (CAR) when clashes erupted between the Munzaya and Enyele ethnic groups over traditional fishing and farming rights.

Edwards added that an additional 100,000 Congolese were displaced inside Equateur province, but most returned home when conditions improved, while a few thousand refugees also returned on their own from the Republic of Congo and CAR.