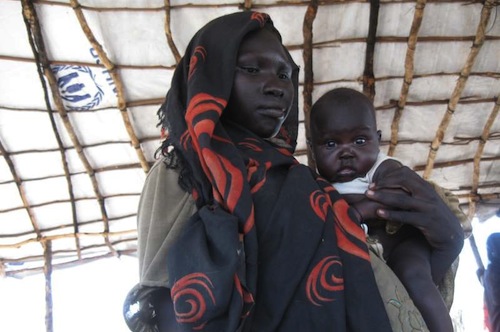 The UN refugee agency has moved some 4,000 Sudanese from the waterlogged and overcrowded Jammam refugee camp in South Sudan’s Upper Nile state to a site some 50 kilometres away that is already nearing its maximum capacity.

Aid agencies decided it was best to move most refugees from Jammam because of fears for their welfare amid worsening living conditions and a lack of potable water. Torrential rain and several massive influxes had exacerbated the dire situation.

The agency is also set to transport a further 15,000 refugees from Jammam this week to the newly-established Gendrassa camp, some 50kms away. More contingency sites have been identified in Maban County. Several thousand people are believed to be on their way to the border from Sudan’s Blue Nile state.

Meanwhile, with Yusuf Batil reaching its maximum capacity of 34,500 refugees, water supply and hygiene promotion need to be stepped up. More water distribution points are being established to increase daily water supply, which currently stands at about 13 litres per person per day.

In the new Gendrassa camp, two boreholes have been sunk and will initially be able to provide enough water for up to 10,000 people at 15 litres per day per person. A third borehole is being sunk.

Health is also a big issue. “We are continually concerned about the incidence of diseases, particularly bloody diarrhoea, but also malaria and respiratory tract infections in the camps,” UNHCR’s chief spokesperson, Melissa Fleming, said on Tuesday.

Aid agencies are now expanding medical services as well as public health campaigns to ensure improved hygiene standards and early detection of disease in camps. Most of the recent arrivals reach the camps exhausted and weak. Malnutrition and mortality rates among children are concerning.

Wider nutrition programmes are being set up in all camps and more oral rehydration points are being established. Cases of diarrhoea are also being closely monitored with samples regularly sent for laboratory testing.

So far in July, some 400 cases of malaria have been reported in health centres in Doro and Yusuf Batil camps. UNHCR and others are renewing the distribution of insecticide-treated nets and key public areas are being sprayed.

Meanwhile, the number of refugees arriving in the nearby Unity state has dropped from 800 refugees per day in June to 250 people per day in July. Some 55,000 refugees still in Yida camp – close to the border – will remain there for the coming months as the area has been cut off by flooding. Airlifts have now become the only viable means of access to the refugee site.

“The hygiene and health situation in Yida remain of serious concern and humanitarian partners are deploying teams around the camp to disseminate hygiene and health messages and identify cases for immediate medical attention,” Fleming said, adding that a mortality survey was being conducted.

Upper Nile state is currently home to more than 100,000 refugees while Unity hosts nearly 60,000. A verification exercise to ascertain the number of refugees is under way and will likely lead to adjustments to the estimates of the refugee population in the area.