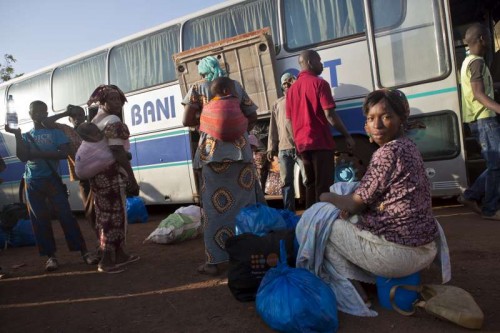 The UN refugee agency said Friday that almost two months after the launch of the French military intervention in Mali, UNHCR is still seeing large numbers of internally displaced people (IDP), while in surrounding countries the numbers of refugees are still high and in some cases increasing.

“Despite improvements to the security situation in some areas, fear of returning home remains widespread,” said Adrian Edwards, a UNHCR spokesman.

Edwards said that spontaneous returns among IDPs were still low although bus services between the Mali capital Bamako and the northern town of Gao resumed last week, and boats were also now travelling between the towns of Mopti and Timbuktu.

For the internally displaced and refugees alike the primary worry remains insecurity. “Continued fighting, suicide attacks, reprisal attacks against some communities, the presence of landmines and unexploded ordnance in the regions of Mopti, Gao and Timbuktu, are all cited as reasons to delay returning,” Edwards noted.

However, the absence of services in the north is also a factor. With few schools functioning there, and government authorities still absent in many towns and cities, many displaced families prefer to wait.

For those outside Mali an additional complication is ethnic make-up, as a majority of the refugees are Tuareg or Arab. Fear of reprisal attacks is widespread, as is fear of criminality or that jihadists might remain present in the community.

A reflection of the situation is that while new refugee numbers are substantially down on their levels of a few weeks ago, Mali is continuing to see net refugee outflow, albeit a modest one. During February, average arrivals in Mauritania were more than 1,500 people per week – mainly from the Lere, Goundam, Gnoufonke and Timbuktu areas. Refugee numbers in Burkina Faso and Niger are static.

UNHCR believes that reconciliation efforts are urgently needed, together with efforts to combat impunity, to encourage peaceful coexistence between communities, to help long-term stabilization and security and to prevent Mali’s displacement crisis from becoming more protracted. We are at present planning support for reconciliation in areas of displacement and returns, as well as in refugee camps.

“The north and the south need to trust each other, we need reconciliation,” said Fama, an ethnic Tuareg sheltering in Bamako, where she said she is regarded with suspicion. “We just want to live in peace now and have more access to development,” added the 56-year-old.

Meanwhile, some of those who have returned to their homes from urban areas like Bamako, or are thinking about it, say it is too costly in the cities. “Life is too expensive in Bamako, we can’t afford to stay longer here,” said 18-year-old Fatoumata as she waited to board a bus to Gao.

“We live in very bad conditions here, with limited access to electricity and current water. We can’t find jobs here,” added the young woman, who fled to Bamako with her husband last April and gave birth later in the year.