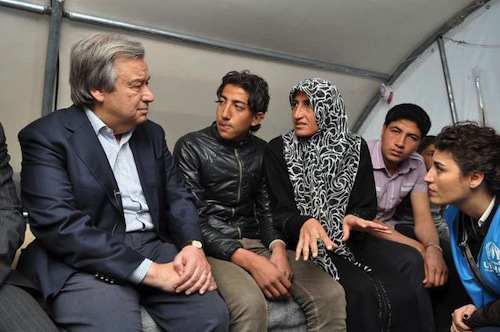 UN High Commissioner for Refugees Antonio Guterres yesterday welcomed the European Union’s announcement of a major new contribution of up to €400 million for the Syria situation until the end of the year.

The funding announced by the EU is among the largest so far to the Syria crisis by any donor. The €400 million is expected to go towards the regional refugee response as well as humanitarian needs inside Syria. UNHCR understands that €150 million is allotted for development-related aid that includes support to communities hosting refugees and security for refugee camps.

“This funding is extremely important and very, very timely,” a press release quoted Guterres as saying. “Syria is fast becoming one of the most tragic, most dangerous, and largest crises since the end of the Cold War, and it is causing suffering on an enormous scale. The urgency of needs is difficult to overstate.”

The Syria situation has grown rapidly in recent months, with thousands of people fleeing across borders daily, and placing strain on neighbouring countries as they cope with the inflows. UN humanitarian agencies are expected to announce on Friday a major new funding push, among which will be an appeal for targeted funds in support of two of the largest refugee-hosting countries, Jordan and Lebanon.

In view of the extraordinary scale and nature of the crisis, and to prevent exhaustion of donor funding for the world’s other current displacement emergencies – among them Mali, Democratic Republic of the Congo, South Sudan and Myanmar – High Commissioner Guterres, along with his counterparts at the UN Office for the Coordination of Humanitarian Affairs (OCHA), the World Food Programme and the UN Children’s Fund (UNICEF), has in recent months appealed to governments worldwide to establish dedicated budgets for Syria.

Guterres yesterday reiterated this appeal. “We are facing a catastrophic situation in Syria, but we must not forget that on a daily basis thousands of people are being forcibly displaced in other regions and countries where there is conflict,” he said. “I encourage other donors to come forward as the European Union has done today.”