UNICEF capitalized on innovation to reach most disadvantaged in 2012 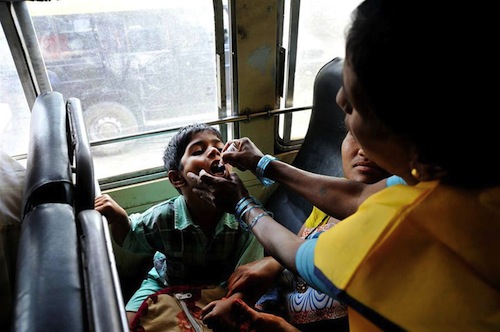 Despite challenging economic times and complex emergencies affecting children in nearly 80 countries, the United Nations Children’s Fund (UNICEF) boosted its innovation last year to create programmes and partnerships to reach those most vulnerable, the agency said launching its annual report.

With the approaching 2015 deadline to reach the eight anti-poverty targets known as the Millennium Development Goals (MDGs), UNICEF Executive Director Anthony Lake said much progress has been made – including declining poverty rates, the near eradication of polio, increased immunizations, more girls attending school, improved access to clean water and nutrition, and more children surviving and thriving beyond their fifth birthdays than ever before.

“But these results are no excuse for rest,” Mr. Lake stressed in the report’s forward. “Our goal is to reach every child, everywhere, no matter how distant or remote, no matter what barriers stand in the way,” he added.

Among its successes, the agency highlights in its Our Story 2012 report the use of mobile phone texting to register births in Nigeria and Uganda, the lack of which in the past has prevented children in those countries from attending school and made them more vulnerable to trafficking and other dangers.

Similarly, this year’s report also highlights the use of a RapidSMS programme to quickly diagnose and treat HIV-infected infants in Zambia, cutting turnaround time for test result from 44 days to 26.

In addition, innovative partnerships, such as between UNICEF and the UN Population Fund (UNFPA), led to the creation of the Commission on Life-Saving Commodities for Women and Children to improve access to life-saving health interventions for children under five years of age and women of childbearing age. These activities are in support of UN Secretary-General Ban Ki-moon’s Every Woman Every Child initiative.

In the report, the agency said it and its partners responded to 286 humanitarian situations in 79 countries last year. Among those, the Syrian conflict where UNICEF said it delivered safe water benefitting more than 100,000 people in refugee camps and among host communities, and winter supplies to more than 260,000 people in the country.

The UN agency also said it helped to provide access to uninterrupted education for nearly 80,000 children, provided psychosocial care for an estimated 47,000 children and supported measles vaccination for more than 1.4 million children.

“The organization remains both a world leader in the procurement of supplies for children and the world’s largest provider of vaccines to developing countries,” according to the report, which added that UNICEF’s procurement strategies and financing mechanisms last year generated savings of more than $197 million.

The report also notes that cash contributions to the UN agency rose eight per cent over the previous year, “underscoring donor trust in UNICEF’s ability to leverage its expertise, technical know-how, broad partnerships and global reach.”