UNICEF steps up efforts to stop polio outbreak in Somalia 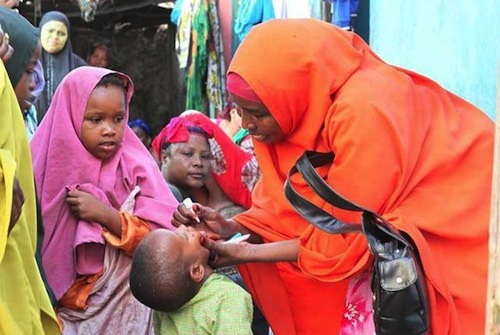 An emergency contribution from Japan will enable the United Nations Children’s Fund (UNICEF) and its partners to tackle a polio outbreak in Somalia that has already paralyzed nearly 100 children and threatens hundreds of thousands more who are not vaccinated.

UNICEF said it will be able to procure and distribute urgently needed polio vaccines, and prevent the further spread of the virus across the Horn of Africa nation and into neighbouring countries with the $1.3 million provided by the Japanese Government.

“Lack of access to routine immunization in Somalia has created the largest known reservoir of unvaccinated children in a single geographic area in the world. The total number of Somali children who had never been vaccinated between 2008 and 2012 was estimated to reach a million,” says Sikander Khan, UNICEF Somalia Representative.

“The poliovirus in such a large reservoir has the potential to result in a catastrophic outbreak, the likes of which are beginning to be seen and as such constitutes an international emergency,” he added in a news release.

In May, a two-year-old girl from the capital, Mogadishu, became the first confirmed case of polio in Somalia in more than six years. The country had been polio-free since March 2007.

As of July, the virus has paralyzed 95 Somali children: 94 confirmed cases in South Central Zone, which includes Mogadishu, and a case in Somaliland. Another nine cases have also been reported in the Dadaab camp in Kenya – the largest refugee complex in the world.

With the help of UNICEF and the World Health Organization (WHO), Somali communities have launched emergency vaccination campaigns to boost their low polio vaccination coverage. The country currently has the second lowest coverage in the world at 47 per cent, after Equatorial Guinea.

So far, polio vaccines were prepared for six immunization campaigns between May and August, and five rounds have already been carried out. However, vaccines for additional campaigns between September and December have not yet been secured.

More than 2.8 million children under the age of 10 are expected to benefit from Japan’s contribution, which will cover more than 5 million doses of oral polio vaccines for two rounds of immunization activities in the coming months.

UNICEF has been working to support partners and local communities to minimize the scale of this outbreak. However, it warned that frequent movement of people within and between Somalia, Kenya, Ethiopia and South Sudan could transport the virus further from Somalia to the entire Horn of Africa.

Before the new outbreak, the worldwide number of polio cases had decreased by more than 99 per cent from 350,000 in 1988 to 223 cases in 2012 with active cases reported in only three endemic countries: Afghanistan, Pakistan and Nigeria.

“The outbreak in Somalia, if not controlled quickly, could jeopardize global efforts to wipe out polio once and for all,” UNICEF warned.