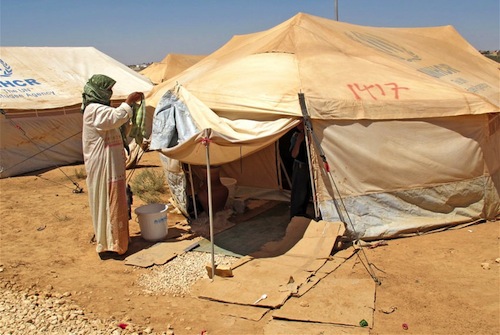 One year after Za’atari camp was carved out of the desert in northern Jordan to host refugees fleeing Syria, the United Nations children’s fund said that while the makeshift city has reached zero maternal mortality, it grapples with educating tens of thousands of eligible children.

“Last year when the camp opened on 29 July 2012, it was nowhere in the desert. There was absolutely nothing,” UN Children’s Fund (UNICEF) Communications Officer in Jordan, Mark Vergara, told UN Radio.

Housing more than 120,000 – half of them children – the site has become the fourth largest city in Jordan and is also the world’s second largest refugee camp behind Dadaab in eastern Kenya.

The camp has made progress. It has three “very well provided” hospitals, Vergara said, resulting in better health care for the refugees than the general population. “Mortality rates are lower than outside of the camp,” Vergara said.

He noted that while food, water and sanitation remain key priorities at the camp, a major challenge is education for the 30,000 children that are able to go to school.

“Only 12,000 are registered,” Vergara said. He added that financial strains necessitating children to work and concerns of insecurity are also challenges to school attendance.

“Parents are reluctant to let the child – especially the daughters – walk through the camp to school. We have created some assembly points to escort the children. It’s not really dangerous, but more cases of harassment,” he added.

Lack of electricity in schools, particularly combined with hot temperatures and the holy-month of Ramadan when fasting is obligatory, has also dulled attendance.

In addition, students follow a Jordanian curriculum in the camp, which also adds to the overall challenges.

“But it’s very important that these children as much as possible do go to school because even if the war stops today, which of course is unlikely, unfortunately, it will take years to rebuild Syria. And of course, who will rebuild Syria but the kids who are now in host countries in Lebanon, Turkey, Iraq, and of course, in Jordan,” Vergara said.

UNICEF is due to start a massive back-to-school campaign next month working with communities, parents and religious leaders in the camp to get children into classrooms and have them stay there.

Following a visit to the region earlier in the month, Leila Zerrougui, Special Representative of the Secretary-General for Children and Armed Conflict, said without a political solution to the conflict in Syria, the country faces “a generation of angry, illiterate adults.”

Vergara said one of the challenges facing the UN agency and its partners in the camp is how to plan for its future; the camp has already been in use longer than originally expected.

“Life is not perfect in Za’atari,” he said. “If you ask people around the camp the only thing they want to do is go back to Syria and nothing can replace home. But at the end of the day, they are here because they have no alternative.”

UNICEF in Jordan has appealed for $115 million towards the end of 2013 to assist the needs of the refugees. A bit over half of that amount has been funded, according to the UN agency.

“That is not bad, but the question now is not 2013, it is about 2014 maybe 2015,” Vergara said. “How much of this is sustainable? It is a very expensive operation and people are still coming in. It really depends on what happens on the other side of the border.”