Up to 140,000 people still displaced one year after communal clashes in Myanmar 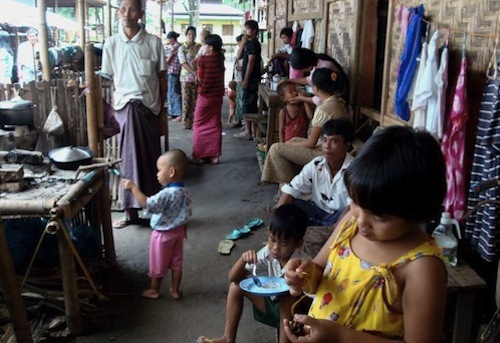 Up to 140,000 people remain displaced a year after inter-communal violence erupted in Myanmar’s Rakhine state, the United Nations refugee agency said on Friday.

The UN High Commissioner for Refugees (UNHCR) says that it stands ready to support the Government in registering all internally displaced persons (IDPs) and to promote reconciliation for safe and sustainable voluntary returns.

UNHCR has been working with the authorities and partners to provide water, sanitation and healthcare services to those uprooted by the violence between Buddhists and Muslims.

Some 75,000 people were uprooted in the first wave of riots in northern Rakhine state last June. Another 36,000 were displaced by a second wave of unrest in October.

“Many others who were not directly affected by the violence have lost their livelihoods as a result of restricted movements due to the security situation. Some have been forced to leave their homes in search of assistance,” UNHCR spokesperson Adrian Edwards told reporters in Geneva.

There are an estimated 13,000 people living in makeshift sites around the state capital Sittwe and some 2,800 people in Maungdaw who are not formally considered IDPs by the authorities and who have therefore not received aid systematically.

In the last year, UNHCR has distributed relief supplies such as plastic sheets, sleeping mats and kitchen sets for 75,000 IDPs. Supplementing the Government’s shelter programme, it has provided tents, temporary or permanent shelters to 45,000 people. Additional shelters are being built by UNHCR for 25,000 IDPs in Pauktaw and Myebon townships who are vulnerable to flooding during the rainy season.

“UNHCR has been working with the authorities and partner agencies to make sure that the IDPs receive adequate water, sanitation and health care services,” said Mr. Edwards, adding that this has been difficult in some areas, with aid workers being harassed or threatened and displaced people unable to move freely to access basic services.

UNHCR has highlighted the urgent need to register all IDPs in order to improve aid delivery and better respond to the needs of the most vulnerable among them.

“While humanitarian assistance remains the priority for now, we are also working with the Government to advocate for action to promote dialogue and peaceful co-existence between the communities to pave the way for voluntary return,” Mr. Edwards stated.

The agency added that active steps must be taken to stem the flow of people out of Rakhine. Since last June, more than 27,000 people – believed mostly to be from there – have embarked on dangerous boat journeys in search of safety and stability in other countries.

UNHCR has appealed to Governments in the region to keep their doors open to people in need of international protection. It is also asking authorities in Myanmar to urgently address the root causes of this outflow of people.

The agency also noted that it needs $80 million to meet the needs of people of concern in Myanmar – including IDPs in Rakhine, Kachin and the south-east – until the end of the year. It has so far received 18 per cent of that amount.