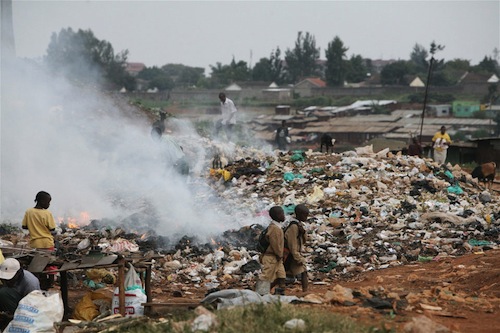 United Nations Deputy Secretary-General Jan Eliasson launched a call for urgent action to end the crisis of 2.5 billion people without basic sanitation, and to change a situation in which more people worldwide have mobile phones than toilets.

The call to action, which comes on the eve of World Water Day, aims to focus on improving hygiene, changing social norms, better managing human waste and waste-water, and, by 2025, completely eliminating the practice of open defecation, which perpetuates the vicious cycle of disease and entrenched poverty.

“I am determined to energize action that will lead to results,” said Eliasson. “I am calling on all actors – government, civil society, business and international organizations – to commit to measurable action and to mobilize the resources to rapidly increase access to basic sanitation.

“Let’s face it – this is a problem that people do not like to talk about. But it goes to the heart of ensuring good health, a clean environment and fundamental human dignity for billions of people – and achieving the Millennium Development Goals. With just over a thousand days for action before the 2015 MDG deadline, we have a unique window of opportunity to deliver a generational change.”

The countries where open defecation is most widely practiced are the same countries with the highest numbers of under-five child deaths, high levels of under-nutrition and poverty, and large wealth disparities.

“We strongly support this effort to increase the focus on sanitation,” said the Deputy Executive Director of the UN Children’s Fund (UNICEF), Martin Mogwanja, who noted that ending open defecation will contribute to a 36 per cent reduction in diarrhoea, which kills three quarters of a million children under five each year.

“We can reduce the cases of diarrhoea in children under five by a third simply by expanding the access of communities to sanitation and eliminating open defecation,” he told reporters at the launch of the call to action at UN Headquarters. “In fact, diarrhoea is the second largest killer of children under five in the developing world and this is caused largely by poor sanitation and inadequate hygiene.”

Mogwanja said he witnessed personally the impact of open defecation in both development and humanitarian contexts when he worked in Pakistan. A total sanitation project was developed there for the flood-affected areas, together with non-governmental and government partners. In less than two years, over six million people gained access to toilets and are now living in open defecation-free communities.

“But the effort succeeded not by building latrines; it succeeded by getting people to recognize and to talk about the problem,” he stated.

The private sector also played an important part in this transformation, he said, by engaging in sanitation marketing activities, and developing a supply chain which ensured that people had access to the right products in the right place at the right time.

“And it worked,” Mogwanja stated, noting that with the direct support of UNICEF and its partners, over 25 million people in over 44,000 communities now live in open defecation-free environments.

“This can also improve the safety of women and girls, who are often targeted when they are alone outdoors. And providing safe and private toilets may also help girls to stay in school which we know can increase their future earnings and help break the cycle of poverty.”

The call to action will not set up any new structures or funding mechanisms, but focus on generating action at the community level – one community at a time.