US President urges dealing honestly with tensions between Arabs and West 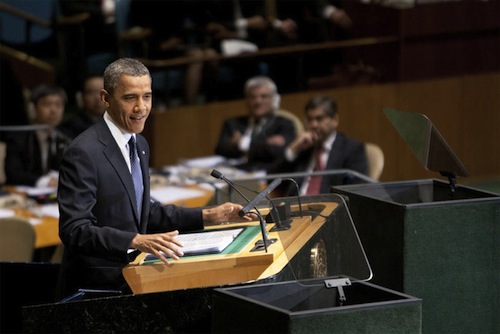 Warning that the world faces “a choice between the forces that would drive us apart and the hopes we hold in common,” United States President Barack Obama said the deadly violence sparked by an anti-Islam video is an assault on the very ideals upon which the United Nations was founded.

“The events of the last two weeks speak to the need for all of us to address honestly the tensions between the West and an Arab World moving to democracy,” he told scores of heads of State and Government attending the 67th General Assembly’s General Debate on its opening day, calling on world leaders to espouse the peaceful settlement of disputes.However, I do believe that it is the obligation of all leaders, in all countries, to speak out forcefully against violence and extremism.

Cities in North Africa and the Middle East recently experienced violent protests in response to an anti-Islamic video produced in the state of California by a US citizen. In the eastern Libyan city of Benghazi, the US ambassador to the country, Christopher Stevens, and three other diplomats were killed, and others injured or killed, when suspected Libyan religious extremists stormed the US Consulate there.

The film has drawn widespread condemnation around the world, including from UN Secretary-General Ban Ki-moon.

“On this we must agree: there is no speech that justifies mindless violence,” President Obama said, calling the video “crude and disgusting,” but explaining how such hateful comment is allowed by the freedom of speech clause in the US constitution.

“There are no words that excuse the killing of innocents. There is no video that justifies an attack on an Embassy. There is no slander that provides an excuse for people to burn a restaurant in Lebanon, or destroy a school in Tunis, or cause death and destruction in Pakistan,” he added, referring to the attacks that killed Ambassador Stevens and caused deaths elsewhere.

“Burning an American flag will do nothing to educate a child. Smashing apart a restaurant will not fill an empty stomach. Attacking an Embassy won’t create a single job,” he noted.

President Obama said the US has supported the forces of change that have toppled dictators in Tunisia, Egypt, Libya and Yemen, and he called for an end to the regime of President Bashar al-Assad in Syria, where more than 18,000 people have been killed in an uprising against his rule over the past 18 months.

“However, I do believe that it is the obligation of all leaders, in all countries, to speak out forcefully against violence and extremism,” he declared, stressing that the recent violence or hateful speech by some individuals does not represent the views of the overwhelming majority of Muslims any more than the views of the video producers behind the anti-Islam film represent those of Americans.

“It is time to marginalize those who, even when not resorting to violence, use hatred of America, or the West, or Israel as a central principle of politics,” the US President said. “For that only gives cover, and sometimes makes excuses, for those who resort to violence.”

President Obama pledged that the US will never retreat from the world and will bring to justice those who harm its citizens and friends, while standing with its allies and partnering with countries to deepen ties of trade and investment, science and technology, energy and development.

“It is time to leave the call of violence and the politics of division behind. On so many issues, we face a choice between the promise of the future, or the prisons of the past,” he declared.

“The future must not belong to those who slander the prophet of Islam. Yet to be credible, those who condemn that slander must also condemn the hate we see when the image of Jesus Christ is desecrated, churches are destroyed, or the Holocaust is denied. Let us condemn incitement against Sufi Muslims and Shiite pilgrims.”

Turning to specific crises, President Obama said the future for Israelis and Palestinians must not belong to those who turn their backs on the prospect of peace and thrive on conflict, and those who reject Israel’s right to exist, but to those who pursue the hard but clear goal of a secure, Jewish state of Israel and an independent, prosperous Palestine.

On Iran, he said the US wants to resolve nuclear issue through diplomacy and believes there is still time and space to do so.

“But that time is not unlimited,” he warned. “We respect the right of nations to access peaceful nuclear power, but one of the purposes of the United Nations is to see that we harness that power for peace. Make no mistake: a nuclear-armed Iran is not a challenge that can be contained.

“It would threaten the elimination of Israel, the security of Gulf nations, and the stability of the global economy. It risks triggering a nuclear-arms race in the region, and the unravelling of the non-proliferation treaty. That is why a coalition of countries is holding the Iranian government accountable. And that is why the United States will do what we must to prevent Iran from obtaining a nuclear weapon.”

The US President also met with Secretary-General Ban Ki-moon today. In their meeting, the two men discussed the importance of combating hate speech and incitement to violence while protecting free speech, and agreed on the importance of the UN’s work to promote tolerance.

Other topics they discussed included the situation in Syria and its impact on the region, the needs of the Palestinian people and the growing challenges in West Africa’s Sahel region, in addition to the global challenges on food and nutrition, women’s and children’s health, and education, and the need for UN reform.