Posted on: March 8th, 2012 by Julie Jalloul No Comments

Women of the Middle East 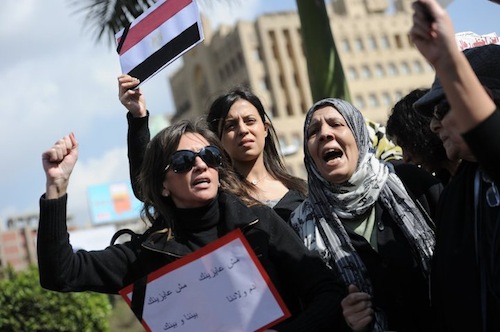 Accustomed to stereotypical depictions, Westerners are told that Middle Eastern women are, veiled powerless souls shrouded in their black chadors -the ultimate symbol of oppression- hidden from sight. This narrative, with slight differences, has been a dominant element of Western knowledge about the position of women in the Middle East since the 18th century.

But the “Freedom fever” that has rocked the Middle East for the past year has shifted gender dynamics and challenged predetermined notions of women in the Arab world. Women in Egypt did not just take part in the protests; they were at the forefront of the revolution. Hungry for freedom and equality, bloggers such as Leil Zahra Mortada took momentous risks to keep the world up to date daily of the scene in Tahrir Square and elsewhere while Asmaa Mahfouz’s video “I go out to the street on January 25” was watched by millions on youtube, in which the activist explains why Egyptians should revolt. The New Opinion Workshop (NOW) estimates that approximately one-fifth of those taking to the streets in Change Square are women, which in and of itself represents a transformation in a country that ranked last in the 2011 Global Gender Gap report. Mubarak has been toppled but women are still, however, excluded from political participation in Egypt. During the parliamentary elections, there was not one even female candidate. Beside exclusion from national politics, they are still subject to torture, brutality and second-class treatment. It seems that their political activism has been limited to protests.

Ben Ali has been toppled and Tunisia’s interim government took over. Scheduled parliamentary elections were held on October 23, 2011. This election allowed voters, both women and men, to choose their representatives for a Constituent Assembly that will create a new constitution and political framework for Tunisia. The leader of the party An-Nahda pro-democracy party, which won 40% of the parliamentary votes, Rachid Ghannouchi, has pledged not to reverse the rights and freedoms Tunisian women have gained in the past. Tunisia’s first elections saw an unprecedented registered voter turnout of over 90%, with many women voting for the first time with women gaining 25% of the seats in the Constituent Assembly. It is important to note that According to UNESCO these women protesters are well-educated, with a literacy rate of 71%, outnumbering their men counterparts in universities.

In Yemen women have helped to create a pulsating civil society, something recognized internationally last year when Yemeni and women’s rights activist and journalist Tawakkol Karman was one of three women to be awarded the Nobel Peace Prize. Yemeni activist Dalkis al-Lahabi said that the number of women activists had grown tenfold as a result of the uprising. “It brought the women back to the Yemeni civil and political society,” she said to NOW. They were also at the forefront of demonstrations calling for political and human rights reform, which led Yemen’s President Ali Abdullah Saleh signing a power-transfer deal in November 2011. But even in Post Saleh Yemen discrimination against women is still on the rise. Women who took part in last year’s protests were harassed, arrested and in some cases beaten for their peaceful activism.

A little bit north of Yemen, due to the media blackout since the uprising began in the country in March, it is still difficult to talk to women activists in Syria, many of whom are hiding. Some organized women-only protests, others in the mixed crowds and others on microphones to lead defiant chants at protests. Fadwa Suleiman, has gone from celebrity to revolutionary-freedom fighter, and finally to an escapee renounced by her own family. She’s now in hiding and has stated that if she’s caught she expects to be beaten, tortured, imprisoned, and killed.

How will the situation for Arab women develop? Will it progress or regress? No one has a clear picture about the future and no one had ever imagined that we would see the fall of three major dictators.  “Free and fair” elections are at least one step towards establishing a democracy and certainly not the last, though the West forgets this point far too often. Keeping up with an actually democratic political life remains a challenge in every liberal democracy, and as analysts argue, we should not expect the Middle East and North Africa to change in a year.