Posted on: December 1st, 2012 by AlYunaniya Staff No Comments

Women’s role in advancing peace and security must be supported 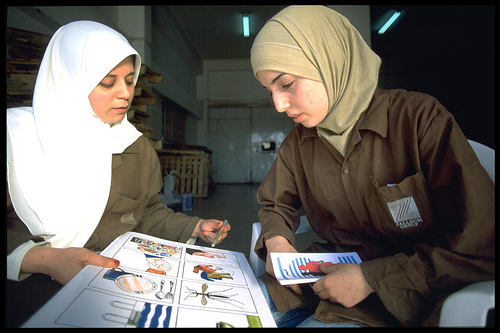 Top United Nations officials highlighted the invaluable role of women’s organizations and civil society groups in preventing violence and resolving conflict, stressing that their contributions are vital to building a peaceful world and must be further supported.

“We need to ensure that women have opportunities to play their full role in peace and security,” the Executive Director of the UN Entity for Gender Equality and the Empowerment of Women (UN Women), Michelle Bachelet, told a debate of the Security Council on women and peace and security.

She noted that wherever there is conflict, whether in Mali, Syria, the Middle East, or the eastern Democratic Republic of the Congo (DRC), “women must be part of the solution.”

Yesterday’s debate, which was originally scheduled for late October but was postponed due to Hurricane Sandy, marks the 12th anniversary of Security Council resolution 1325, which called for women’s engagement in conflict resolution and peacebuilding.

Meeting briefly in the wake of the storm, the Council issued a presidential statement on the issue, in which it called on the international community to give women’s civil society organizations a prominent role in the negotiation, planning and implementation of peace processes and post-conflict development programmes.

In countries such as Kyrgyzstan, Timor-Leste, Haiti, South Sudan, Liberia, Nepal and many others, women are leading innovative approaches to prevent conflict and violence and build peace in their communities.

Bachelet, who presented the report, highlighted what women’s groups in Mali are doing right now to contribute to non-violent solutions to the crisis in that country, which has been divided since rebels took control of the north earlier this year.

“In spite of their absence from official conflict resolution processes, women leaders in the North are using informal channels to call on the leaders of armed groups to participate in peace dialogues,” she noted.

“Just two weeks ago,” she added, “nearly 1,000 women leaders and members of civil society groups gathered in Bamako and delivered a common call for peace, expressing solidarity across ethnic and other divisions and recommended specific measures to protect women’s rights and prevent violence against women and children.”

Stressing the importance of “going the extra mile” to ensure that women can play their full role, Ms. Bachelet called on world leaders to provide determined leadership, dedicated resources and direct opportunities to enable women to contribute to the maintenance of peace and security.

Deputy Secretary-General Jan Eliasson, delivering remarks on behalf of Ban, noted that the role of women’s organizations across the world in preventing violence, resolving conflict and building the foundations for peace is well known.

“Our challenge is to become more systematic in supporting and scaling up these initiatives and making the necessary links to formal peace processes,” he said.

Also highlighting the case of Mali, Eliasson noted the fact that the rights of women and girls are being curtailed in the northern part of the country shows how armed conflict affects women and men differently. “This means that women have to be part of the solution,” he said.

“Engaging women and promoting gender equality as part of our work for peace and security is a daily responsibility and an unfinished mission for all of us,” he added. “It is time for us to finally recognize the role and power of women to help us build a peaceful world.”

In his remarks to the event, the Under-Secretary-General for Peacekeeping Operations, Hervé Ladsous, said that UN peacekeeping missions have supported important progress in some areas, notably women’s political participation at local and national levels. In other areas, including the protection of women activists, more could be achieved.

He described how, a week ago, some 5,000 women flooded the main commercial avenue in Kinshasa, DRC’s capital, to protest the fall of the provincial city of Goma to the 23 March Movement (M23) rebel group – the most massively organized non-violent protest in the country following the fall of the eastern city.

“However, women have not been given any political leverage in the regional negotiations aimed at bringing peace to the embattled eastern part of the country,” he added.

Ladsous emphasized that the key to removing the obstacles that impede women’s full participation in conflict prevention and peacebuilding is the active, systematic consultation with local actors and leaders, including women’s civil society organizations. “This is the only way to develop effective, context-specific and gender-aware solutions.”

In the lead-up to the Council’s debate, women activists and women’s organizations met with senior UN leadership in over 20 countries, facilitated by UN Women, the Department of Peacekeeping Operations (DPKO), the Department of Political Affairs (DPA) and the UN Development Programme (UNDP), to discuss challenges and make their recommendations on issues relating to women and peace and security.