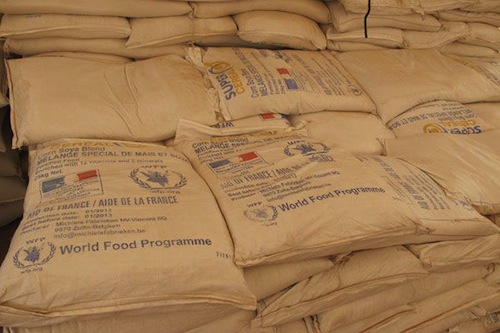 The United Nations humanitarian food agency announced it was intervening in eight regions of Mali with food assistance as part of the world body’s overall efforts to fight the growing humanitarian crisis there.

A spokesperson for the World Food Programme (WFP), Elisabeth Byrs, told reporters in Geneva that the UN agency had already reached more than one million people in the Sahelian country despite its volatile political and security situation.

Byrs’ announcement comes against the backdrop of a high-level meeting held today in Mali’s capital, Bamako, where an African Union (AU), Economic Community of West African States (ECOWAS) and United Nations Meeting of the Support and Follow-up Group on Mali discussed how to address the security, political and humanitarian problems facing the country since the start of the year, when fighting between Government forces and Tuareg rebels broke out in the country’s north.

Since then, radical Islamists have seized control of the north, where they have imposed an extremist version of Muslim Sharia law as well as restrictions that target women in particular.

The instability and insecurity resulting from renewed clashes, as well as the proliferation of armed groups in the region, drought and political instability in the wake of a military coup d’état in March, have led over 250,000 Malians to flee to neighbouring countries, with 174,000 Malians estimated to be internally displaced.

Byrs reported that preliminary findings from a joint WFP/Early Warning System survey conducted this month confirmed the deterioration of living conditions in the north of the country. She added that overall, 4.6 million people across Mali remained at risk of food insecurity and 560,000 children under the age of five were at risk of acute malnutrition.

In addition to its free targeted food distribution centres, which she said had helped more than 250,000 people in the month of October, the WFP spokesperson further noted that the agency was implementing long-term empowerment strategies through capacity building initiatives, such as reforestation, rehabilitation, prevention of soil erosion, building classrooms and roads and well as creating accessible water sources.

Byrs also said that WFP was preparing its Emergency School Feeding programme, targeting 290 schools in southern Mali, where children will receive a WFP ration of ‘Supercereal’ – a highly nutritious product which will enable them to concentrate on class work.

Also on Friday, the UN Office for the Coordination of Humanitarian Affairs (OCHA) announced that a joint mission with the Organization of Islamic Cooperation (OIC) completed a two-day visit to Mali.

The aim of the visit was also to better understand the current humanitarian situation in Mali, assess the assistance already provided, and discuss the challenges faced by the Government and humanitarian actors.

“The visit of the joint mission has allowed us to present the complexity of the humanitarian situation to the international community,” said the UN Humanitarian Coordinator and Resident Coordinator for Mali, Aurélien Agbénonci, in a joint news release.

“It is urgent to strengthen humanitarian assistance to save lives while respecting human dignity and preventing an increase of humanitarian needs in countries neighbouring Mali,” he added. “Interventions can no longer wait because humanitarian needs are becoming bigger day by day while available resources are still insufficient.”

During its visit, the joint mission’s participants discussed the humanitarian crisis in the country with the Government and the diplomatic corps, as well as the humanitarian community and civil society organizations. They also visited a nutritional centre in the district of Kangaba, in the region of Koulikoro in the country’s west.

In the joint press release, OCHA and OIC noted that more than five million people are in need of immediate humanitarian assistance in Mali, representing about one third of the estimated population of 15.8 million.