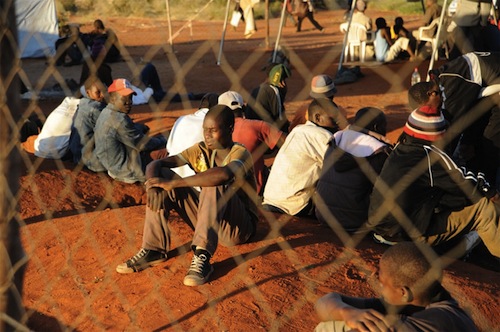 Global inaction on human rights is making the world an increasingly dangerous place for refugees and migrants, Amnesty International said today as it launched its annual assessment of the world’s human rights.

The organization said that the rights of millions of people who have escaped conflict and persecution, or migrated to seek work and a better life for themselves and their families, have been abused. Governments around the world are accused of showing more interest in protecting their national borders than the rights of their citizens or the rights of those seeking refugee or opportunities within those borders.

“The failure to address conflict situations effectively is creating a global underclass. The rights of those fleeing conflict are unprotected. Too many governments are abusing human rights in the name of immigration control – going well beyond legitimate border control measures,” said Salil Shetty, Secretary General of Amnesty International.

“These measures not only affect people fleeing conflict. Millions of migrants are being driven into abusive situations, including forced labour and sexual abuse, because of anti-immigration policies which means they can be exploited with impunity. Much of this is fuelled by populist rhetoric that targets refugees and migrants for governments’ domestic difficulties,” said Shetty.

In 2012 the global community witnessed a range of human rights emergencies that forced large numbers of people to seek safety, within states or across borders. From North Korea to Mali, Sudan and the Democratic Republic of the Congo people fled their homes in the hope of finding safe haven.

Another year has been lost in Syria, where little has changed apart from the ever-increasing numbers of lives lost or ruined. Tens of thousands have died and millions have been displaced by the conflict. The world stood by while Syrian military and security forces continued to carry out indiscriminate and targeted attacks on civilians, and to subject to enforced disappearance, arbitrarily detain, torture and extrajudicially execute those deemed to oppose the government, while armed groups continue to hold hostages and to carry out summary killings and torture on a smaller scale.

The excuse that human rights are ‘internal affairs’ has been used to block international action to address rights emergencies such as Syria. The UN Security Council – entrusted with global security and leadership – continue to fail to ensure concerted and unified political action.

“Respect for state sovereignty cannot be used as an excuse for inaction. The UN Security Council must consistently stand up to abuses that destroy lives and force people to flee their homes. That means rejecting worn-out and morally bereft doctrines that mass murder, torture and starvation are no one else’s business,” said Shetty.

People attempting to flee conflict and persecution regularly encountered formidable obstacles trying to cross international borders. It was often harder for refugees to cross borders than it was for the guns and weapons that facilitated the violence that forced such people from their homes. However, the UN’s adoption of an Arms Trade Treaty in April 2013 offers hope that shipments of weapons that may be used to commit atrocities may at last be halted.

“Refugees and displaced people can no longer be ‘out of sight, out of mind’. Their protection falls to all of us. The borderless world of modern communications makes it increasingly difficult for abuses to be hidden behind national boundaries – and is offering unprecedented opportunities for everyone to stand up for the rights of the millions uprooted from their homes,” said Shetty.

Refugees who were able to reach other countries seeking asylum often found themselves in the same boat – literally and figuratively – as migrants leaving their countries to seek a better life for themselves and their families. Many are forced to live in the margins of society, failed by ineffective laws and policies, and allowed to be the targets of the kind of populist, nationalist rhetoric that stokes xenophobia and increases the risk of violence against them.

The rights of huge numbers of the world’s 214 million migrants were not protected by their home or their host state. Millions of migrants worked in conditions amounting to forced labour – or in some cases slavery-like conditions – because governments treated them like criminals and because corporations cared more about profits than workers’ rights. Undocumented migrants were particularly at risk of exploitation and human rights abuse.

“Those who live outside their countries, without wealth or status, are the world’s most vulnerable people but are often condemned to desperate lives in the shadows,” said Shetty. “A more just future is possible if governments respect the human rights of all people, regardless of nationality. The world cannot afford no-go zones in the global demand for human rights. Human rights protection must be applied to all human beings – wherever they are.”