Yemen: Ban welcomes progress with democratic transition, ‘no turning back’ 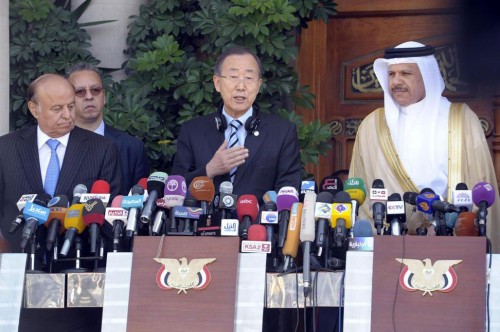 United Nations Secretary-General Ban Ki-moon today urged Yemen to build on progress made over the last twelve months since the signing of a historic transition agreement which helped end violence in the country and set it on a path of democratic transition.

“Your country… was on the brink of civil war, even just one year ago. But you have overcome this with political courage and determination which meant, in the end, foresight and political wisdom have prevailed,” Mr. Ban said at a media encounter in the Yemeni capital of Sana’a. “This is a process which must be irreversible. There is no turning back.”

The UN chief was in the Arabian peninsula nation to mark the forthcoming first anniversary of the conclusion of a peace and transition agreement, reached in the Saudi capital of Riyadh in November last year, and lend his personal support to the country’s transition process.

“The United Nations is here to witness the progress which you have made and also reaffirm our strong commitment that we will stand by the Yemeni people and Government in making advances toward a brighter future, and prosperous and conciliatory and participatory democracy,” he said.

Yemen has been undergoing a democratic transition, with a Government of National Unity under the leadership of President Abdrabuh Mansour Hadi, who came to power in an election in February. This followed an agreement signed by warring factions in November 2011 on a transitional settlement in the wake of widespread protests similar to those seen across the Middle East and North Africa, and the resignation of former president Ali Abdullah Saleh.

An important element of the transition is an all-inclusive, so-called National Dialogue, scheduled to take place later this year, and the outcome of which will feed into a constitution-making process that is to conclude in late 2013, enabling general elections to take place in February 2014.

In remarks for an event marking the anniversary in Sana’a, the Secretary-General welcomed the country’s progress, noting that while calm had returned to most parts of the country, it still faced profound challenges.

He also highlighted the importance of the National Dialogue process and how this needed to be open to all, with women exercising a prominent and meaningful role, and the views and aspirations of Yemeni young people also taken into account.

In his media remarks, the UN chief also thanked the members of the Gulf Cooperation Council and the Security Council, particularly the latter’s permanent members, and other major donors which have been supporting Yemen.

On Tuesday, Mr. Ban is expected to meet President Mohamed Morsy and the Prime Minister Hesham Kandil, as well as the Secretary-General of the League of Arab States, Nabil El-Araby.