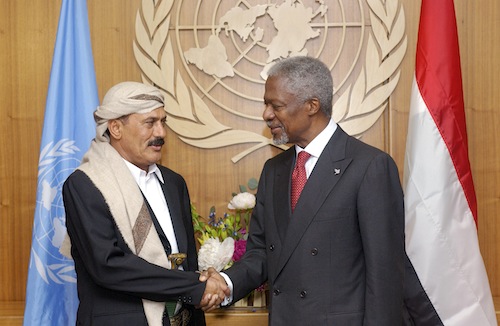 A Yemeni court order to investigate former president Ali Abdullah Saleh and 11 aides in connection with a March 2011 massacre of anti-government protesters is a step toward justice, Human Rights Watch (HRW) said in a statement.

On April 27, 2013, a trial court in the Yemeni capital, Sanaa, ordered the probe of Saleh and other former ranking officials – including his nephews Yahya Saleh and Tareq Saleh.

Yemeni prosecutors should promptly comply with the order and also reopen the original investigation of the so-called Friday of Dignity massacre, Human Rights Watch said.

Gunmen in civilian clothes killed at least 45 protesters and wounded 200 others during a rally in Sanaa, part of the 2011 uprising against the Saleh government. The initial government investigation into the killings was marred by political interference, a Human Rights Watch report found.

“The court ordered investigation of former president Saleh and several top aides for the ‘Friday of Dignity’ massacre may prove a breakthrough for justice in Yemen, but only if prosecutors now do their jobs,” said Sarah Leah Whitson, Middle East director at Human Rights Watch.

“The authorities should leave no stone unturned until they have identified the people responsible for these killings and held them to account.”

A day after the court order, Attorney General Ali al-Awash also ordered an investigation of Saleh and his son Ahmed Ali, until recently the commander of the elite Republican Guard, in connection with the May 2011 shelling of a home belonging to the country’s powerful al-Ahmar tribe.

The strike killed several people including tribal mediators. At the time of the attack, the sheikhs had been trying to end a political standoff between Saleh and al-Ahmar family members who supported the uprising.

In October 2012, lawyers for victims of the Friday of Dignity massacre filed a motion seeking the indictment of the former president and senior officials, who were not among the 78 suspects already on trial for the killings. The court suspended the trial pending a ruling on the motion. Most of the defendants had been registered as fugitives from justice.

Investigations of former government officials are complicated by an immunity law that Yemen’s parliament passed as part of the political deal under which Saleh stepped down in February 2012, ending the year-long popular uprising. The amnesty grants sweeping immunity to Saleh and all those who served with him during his 33-year rule. Victims’ lawyers hope the new investigation will serve as a test case of the immunity law. The law would not prevent the prosecution of Saleh and others by courts outside the country with jurisdiction over international crimes, Human Rights Watch said.

The attack on a rally that demonstrators called the “Friday of Dignity” was the deadliest against protesters of the uprising. Human Rights Watch research found that the Central Security Forces, a paramilitary force then headed by Yahya Saleh, withdrew from the area of the demonstration the night before the killings and largely failed to intervene once the shootings began. Prosecutors never questioned the Salehs and other top officials in connection with the killings, and the former president also dismissed the attorney general at the time, replacing him with al-Awash, just six weeks after he began investigating possible government involvement.

President Abdu Rabu Mansour Hadi, who succeeded Saleh, removed Yahya Saleh as Central Security Forces chief in December 2012. Last year Hadi also removed Tareq Saleh from his positions heading the Presidential Guard and the 3rd Brigade of the Republican Guard, but in April he appointed Tareq Saleh as defense attaché to Germany. The former president remains in Yemen as head of his political party, the General People’s Congress.